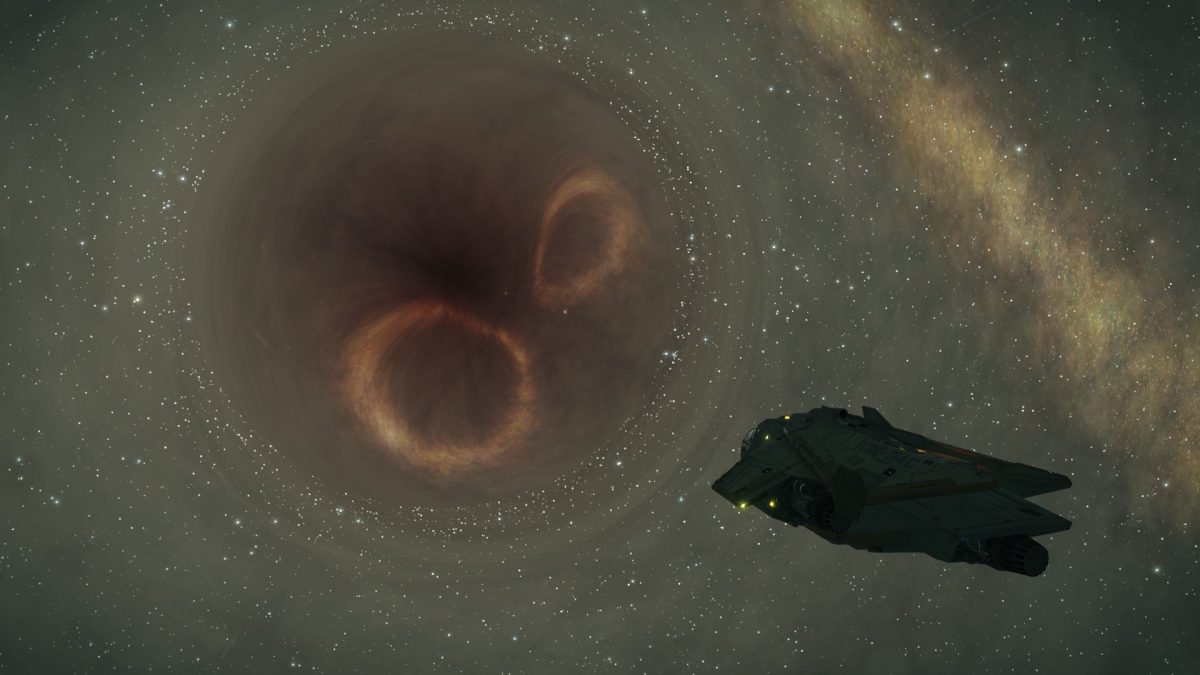 For those who may or may not know Elite Dangerous is a space simulator which allows one to travel our galaxy. The game consists of a 1:1 scale of what our galaxy would be like if we were to explore it all! There are not only millions but billions of stars out there! One in particular is the one in the center of our galaxy called Sagittarius A

The journey to the center of the galaxy is not an easy task. You gotta prep your trip by making sure you have the maximum jump range you can in the ship you choose to make your journey on. For the past year or so I have been working slowly on getting materials needed to outfit my ship for the long journey. It was until June 9th, 2020 when the fleet carrier finally came out and it was gonna be a tool in helping me get to my destination faster!

With a 500LY jump range you would think you can get there in no time! There was 2 parts of the planning . Part one was acquiring the carrier. I didn’t have the money or time to get the money but a friend of mine ThugGooch has been saving up and was able to get the carrier at day one of the launch. With that said we went to phase 2 which was gathering enough fuel for the journey there and beyond.

We learned the fuel for the Carrier is called Tritium. It can either be bought at trade stations or can be mined. Buying them is costly but faster while mining is slow but practically free! We were able to do both ways. With our friend Heavy Drinker who had enough for his own carrier decided to purchase as much tritium as he can! He bought the initial load of fuel as well as some more that we put in reserve. I was able to obtain a few tons as well as gooch just to see how long it will take to gather some by mining. Now mining them is no simple task! While it may be simple to find it’s the amount needed to maintain course! We calculated what we need to get to the center as well as Beagle Point which is mainly on the other side of the galaxy. We spent some time getting the fuel until we were ready to head out!

It was Friday September 4th when we decided to start our jouney! With some coordination on discord we are on our way!

We agreed to wait a bit between jumps to scan a few systems in hopes to find new discoveries. Since it took 15 minutes to jump with a minor cool down we had a 20-30 minute window to explore as much as we can. We were about half way into the trip when I got excited to find 2 waterworlds and nothing but metal rich worlds in a system with 3 stars! I had to scan it all! While i was lucky to scan them all i somehow got left behind since i noticed as i got back to the system the carrier was I jump in where i had to go around the massive sun to get in the line of sight of the carrier. By the time i got there I only had a few seconds to land! I missed the chance and was unable to dock! I was forced to go after the carrier! Good news in between I was able to get some decent prescans as i caught up so it was not that bad.

My part of the journey was at least 3 hours of traveling. Part of it was on the carrier while the rest was scanning! It was not until i woke up on September 10th around 4am when i was informed we were one carrier jump and one ship jump away from our destination! There was a space station so that is where we went before the final jump!

It was a beautiful site to see! I would never have imagined i would ever see the center of our galaxy in my lifetime even if it were to be a simulation! It was an amazing experience! Seeing all the stars in the area makes you truly know we are not the only ones and we will eventually find other lifeforms.

Next stop is Beagle Point which again is the most furthest you can journey in our galaxy from earth! While we have the carrier to help us it’s fuel that’s the problem. We slightly miscalculated how much fuel we need so as i type this i am unsure if we will continue on the carrier or end up continuing on with our exploration ships. While we are already this far there is no turning back. I will get to Beagle Point. When i will get there is unknown but it will be very soon.